Many products on the market contain some worm castings mixed with compost and other elements. The amount of worm castings in most mixed products is 1-3 percent.

At Grandpa’s, we place hundreds of our worms in a 3 gallon confined area consisting of finely pulverized Peat and a special blend of finely ground organic grains.  And we do this with hundreds of containers.   We do not use animal manure to avoid the possibility of the distribution of plant disease like the various forms of ‘blight’ that can pass through animal digestion and still infect plants.  Our special grain mix ensures our worms stay healthy and that their digestive systems are robust.  Within two weeks our worms are rotated into new bedding containers, as every grain of soil and feed has been ingested and turned to castings. Grandpa’s Organic Fertilizer is worm castings that have then been double sifted down to 1/8″ screen.

This is defined as 100% pure worm castings. 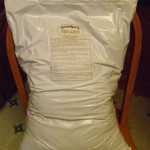 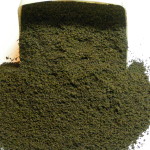 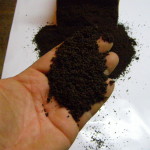 Chemical fertilizers, fungicides, pesticides, and herbicides all require special handling to deal with the high level of toxicity. Worm castings are non-toxic and do not require any special care and handling. There is no fear of any danger to yourself, your pets, or your children.

Understanding the vermiculture process makes it clear why worm castings are approved for use by all Organic Certification organizations.

Worm castings test low on a normal soils report. The nitrogen level of Grandpa’s Organic Fertilizer tests at less than 1 percent. Phosphorous tests around 1 percent. Potassium tests slightly higher than 1 percent. These levels appear to be low but all of these nutrients are in a form that is readily available for use by the plants.  The high benefit to plants in achieved through the exceedingly high microbe and beneficial bacterial count, which breaks down and releases nutrients already in your soil that the plant can readily use.  This process continues in the soil long after the earthworm has departed, because these microbes and healthy bacteria are found in their castings.

What Makes Worm Castings so Effective?

Plants thrive on Nitrogen, Phosphorus, Potassium as well as a host of other trace elements and minerals, that we are still just beginning to understand.  But plants cannot benefit from these until they are broken down to a level that plants can readily access.  This is the power of worm castings.  Worm castings contain an extremely high concentration of the very microbes, enzymes and good bacteria needed to break down these elements, they also break down those organisms which tend to lock up these elements within your soils, like fungus, molds and some harmful forms of Bacteria.  These microbes, enzymes and other beneficial agents  come from the healthy digestive tract of the worm and they coat and thoroughly permeate all of their castings.  Not only are they in the castings, but as they come in contact with your soil and moisture they multiply like yeast, until the whole lump is leavened.  In this way a little worm castings can go a long way.

Extensive university plant growth research has been performed by Ohio State, Cornell University, U.C. Davis, the Australia SIRO, and other agriculture organizations to test the benefits of worm castings. These tests have shown improved plant size, bloom quantity, quality, and color for flowers. Fruit and vegetable tests have shown significant yield increases as well as improvements in taste and appearance. Ohio State research showed that the optimum ratio of worm castings to native soil is 10-20 percent.

Soils can become hardened with the reduction of beneficial soil biology. This limits fertility. Adding worm castings provides the biology needed to return the soil to a softened state. Within a few weeks, the hard soil is workable allowing ease of plant growth.

The decomposition rate of many biological materials is dramatically increased with the addition of worm castings. Testing has shown the decomposition of even prawn and crab shells is doubled when worm castings are added to the soil medium. These shells cannot become valuable in the soil until they are fully decomposed.

Four published university research projects have shown that the complete soil food biology found in worm castings can quickly control fungus problems on a long term basis. Fungus-eating protozoa and fungus-eating nematodes are found in the worm castings. Fungus is an important part of healthy soil but causes nitrogen lock-up and other problems when it gets out of control. Using worm castings as a part of the soil mix will control fusarium, rhyzoctonia, phytophthora, and sclerotinia fungi, and will provide improved plant growth with the release of excess nitrogen as the soil fungi are brought into balance.

Worm castings can very quickly and effectively eliminate odors. Mix 10 percent worm castings with compost or composted dairy manure, horse manure, or chicken manure and the objectionable odors are eliminated within a few hours. With the addition of worm castings, animal manures can be used as effective fertilizers without the offensive odors. With worm castings, fish enhanced compost can be used without creating the powerful bear attracting aromas that using fish brings with it.  This would seem to be an odd statement anywhere but Alaska, where we know the exhilaration fish fertilizers bring to the otherwise quiet and tranquil world of gardening.  Worm castings have been tested for odor absorption compared to activated charcoal and found to be more efficient and much less expensive than activated charcoal.

Testing has shown that several microorganisms found in worm castings work as effective repellants for a large array of insects. A key element for insect repellency is the level of chitinase-producing organisms. Chitinase is an enzyme that will dissolve chitin. The exoskeleton of bugs is made of chitin [so obviously they don’t want to hang out where their skeletons will get dissolved!]. Bugs have various detection mechanisms to determine the level of chitinase in plants and soil. Once the chitinase level is high enough, they will leave the area. Worm castings test with a very high level of chitinase-producing organisms.

Also, some elements in worm castings are able to activate the chitinase-producing organisms found inside plants. Once triggered, these organisms multiply to a level that can be detected by the insects. The repellency effectiveness has been tested and confirmed for white fly, aphids, spider mites and various other bugs. Twenty various plants have been tested showing effectiveness. The rate of repellency is in direct relation to the size of the plant. Spider mites will leave houseplants in about 2 weeks, aphids leave roses in about 6 weeks, and white flies will leave full sized hibiscus in about 3 month.

And all of these benefits have been done ‘Organically’.  That is, exactly as God intended and set in motion.  No artificial chemicals or hormones or medications.  Just humble earth worms.

Find a Grandpa’s Distributor in your area